Jack de Crow   The link is a rather rambling video by me!

The Unlikely Voyage of Jack de Crow by A. J. Mackinnon 2007 Seafarer Books


Sometimes you come across a book that is such a good read, you wonder why on earth you have not come across it before. This recently happened to me whilst browsing some other topic on the Dutch Barge Association (DBA) forum. The book mentioned was The Unlikely Voyage of Jack de Crow by A J Mackinnon, and I decided that a voyage in a 11 foot Mirror dingy from Shropshire to the Black Sea was indeed unlikely for all but the most adventurous among us. I duly ordered it to find out what sort of person would attempt this journey and how could they achieve it, not least how did they plan to cross English channel?  A crossing which many, including myself had not dared to attempt in a motor powered Dutch Barge.  At the time I had absolutely no idea what a Mirror dingy was and, more than that, I had no inkling of the reading pleasure that awaited me between the pages of this little known book.

I am now fully conversant with the possibilities and limitations (if there are any) of a Mirror dingy, and I have become well acquainted with the indomitable Mr Mackinnon; in fact I feel that I have travelled with him on his journey, enjoyed his nature notes, been thrilled at his refusal to be thwarted by almost any obstacle, and impressed by his sheer determination to continue against any odds and remain ever the cheerful optimist throughout!

If he has a failing it is perhaps a reluctance to plan further ahead than where his next meal is to be found. He appears to have a map of some sort but as it covers the entire route from Calais to the Black Sea one presumes it lacks the required detail. He communicates by telephone, not a mobile of course, and he writes a good many postcards. One suspects that if he had the use of modern day internet that he would be reluctant to use it.  But then, if he had all the answers by simply pulling a smart phone from his pocket, he would avoid all the adventures that rely on not knowing what lies ahead.

Boaters will be all too familiar with many of the situations presented here, but perhaps not so eager to emulate the way our protagonist throws caution to the wind on almost every occasion.  Most of us who contemplate a long journey by boat would do a fair amount of research to find out if this idea is feasible.  Not  the captain of little Jack de Crow; the idea of sailing into the unknown is part of the excitement of the voyage!

One of the things that make this book such an amusing read is that the idea of having a plan never seems to occur to Mr Mackinnon. From the very start we really are on a roller coaster ride as he tries to navigate waterways that are to a large extent uncharted, some are no more than ditches, never meant for navigation and one even having strands barbed wire strung across to deter farm animals from wandering of their land.  Others are designed for motorised sea-going vessels and not a small dingy. I suspect that stopping to fully weigh up the dangers, research the likely consequences of proceeding on a given course, would make for far less exciting reading, so even if he has an inkling of what's in store, he doesn't let on!

As the author states at the beginning, he is more than happy to 'exaggerate for effect' and so it is perhaps with a largish pinch of salt that the reader can enjoy the progress of boat and captain/oarsman.  At times (for him) frustratingly slow and at others terrifyingly fast through canals, rivers and seas powered by sail (yes sailing on a French canal in 1997) or by rowing, often against pretty ferocious tides. Once on the Rhine he just manages to row 700 metres upstream to a mooring, (the only mooring) in 2 hours.  That after crossing the Rhine at Koblenz which, of course, took him the 700 metres downstream from his target. That superhuman rowing effort only possible because he had built up strength after rowing pretty continuously for the past few months.

Through thick and thin, good humour characterises his approach to every situation.  Not only that, as befits a teacher of literature his prose is light, lively and down right hilarious on many occasions, and that is said by someone who is not easily moved to laugh out loud!  Maybe it's his Aussie temperament that drives him to tackle any situation with an almost wanton disregard for his own safely, and to hilarious effect.  But to me his joy in the simple pleasures of the river bank, his modesty, his unabashed willingness to fund his supper by busking on a tin whistle when the opportunity arises, his taste for the absurd and his optimism in the face of any danger mark him out in my mind as quintessentially English!
Posted by caya on May 27, 2020 No comments:
Email ThisBlogThis!Share to TwitterShare to FacebookShare to Pinterest

caya@julianandcaya.co.uk
Posted by caya on January 08, 2020 No comments:
Email ThisBlogThis!Share to TwitterShare to FacebookShare to Pinterest

End of cruising and Quercy goes to new owners

A few photos from the time of our final cruise along the loveliest part of the Canal du Centre from Saint Leger sur Dheune towards Santenay, Remigny, Chagny, Rully and on to the end of the Canal at Chalon Sur Saone. 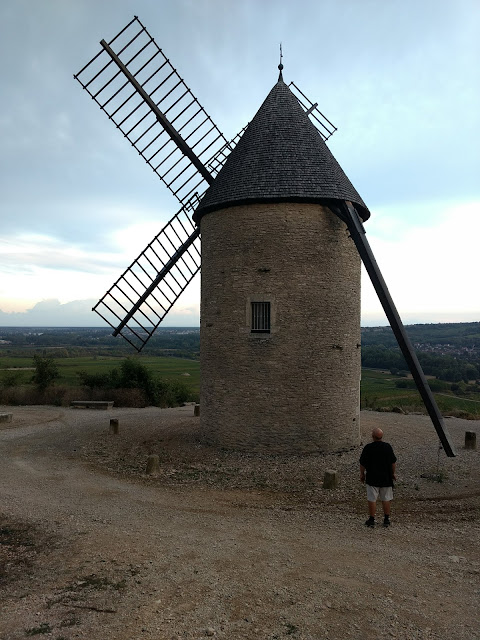 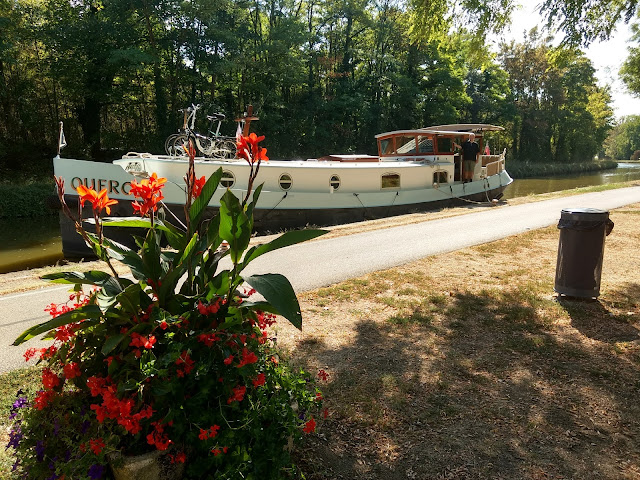 Although the town of Chagny is uninspiring, we got around the whole area on foot and saw a lot of the rugged beautiful countryside.  Hillforts, quarries, caves and vineyards. 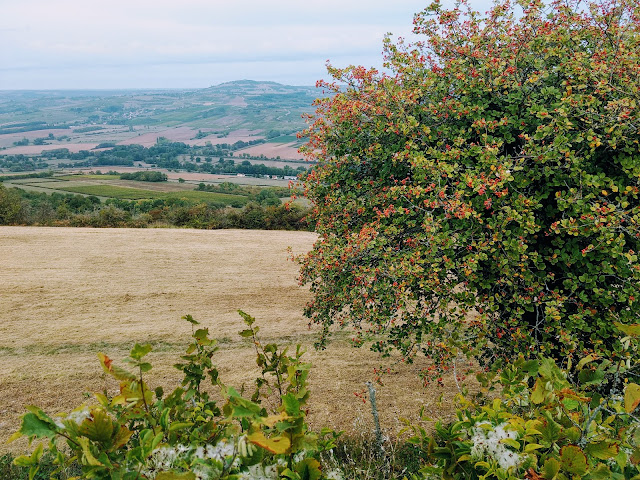 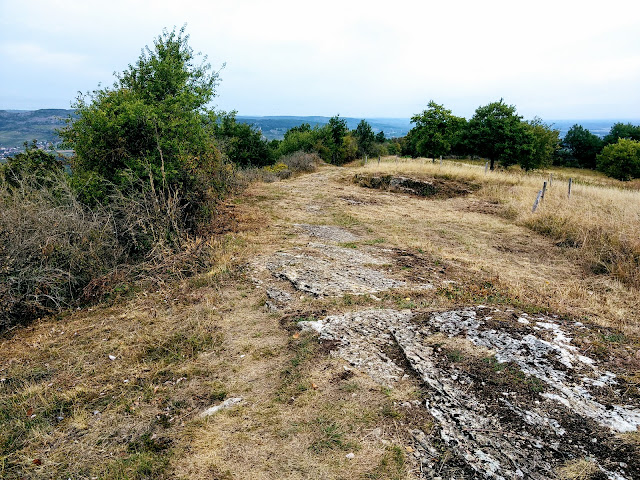 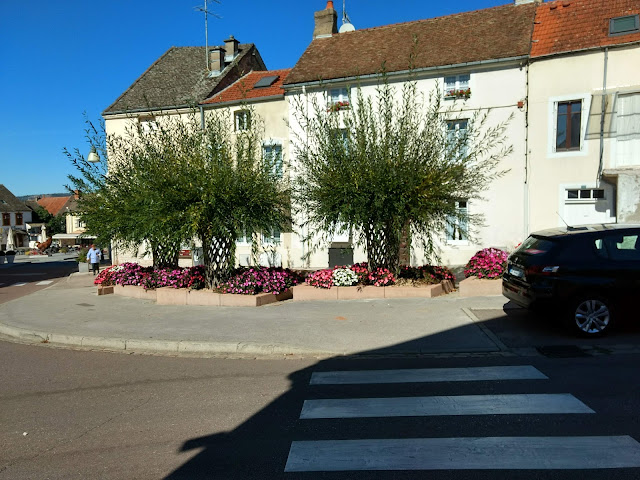 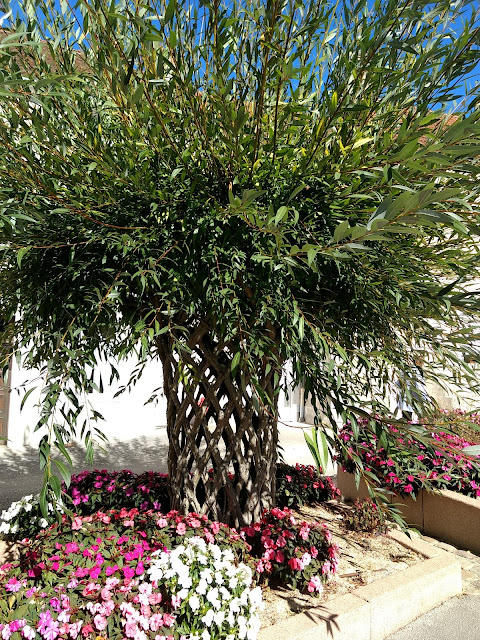 
Posted by caya on December 02, 2018 No comments:
Email ThisBlogThis!Share to TwitterShare to FacebookShare to Pinterest

Here we are in Paral le Monial again, and Julian always corrects me on how to pronounce the name of this town.  He believes that he knows how to pronounce it as he came here about 30 years ago as part of a twinning group. 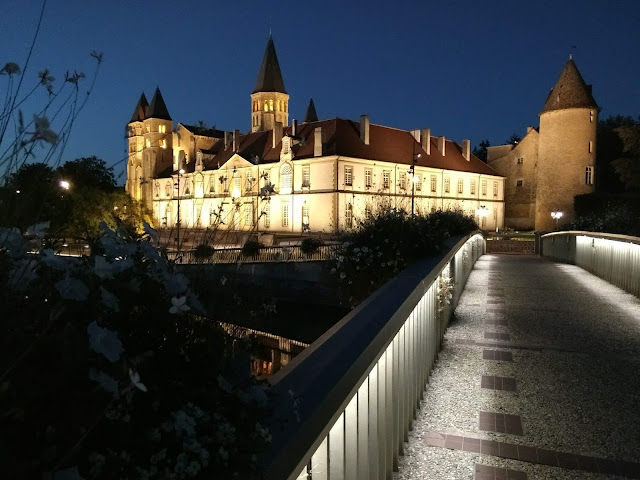 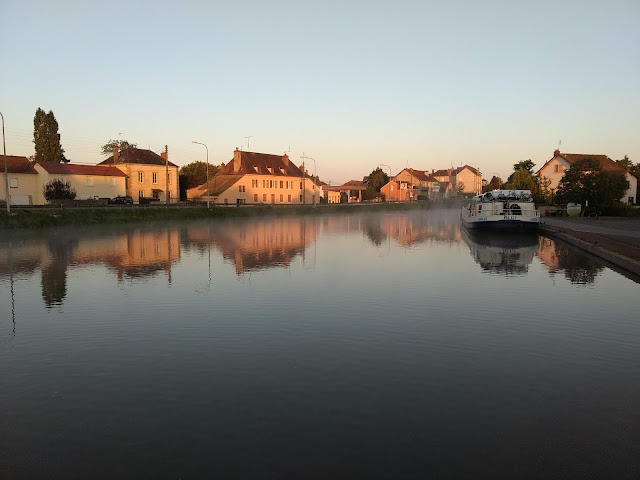 I'm afraid that I have little confidence in either Julian's ability to pronounce French words or his memory going back 30 years, and I seem incapable of saying it in he insists is he correct way! 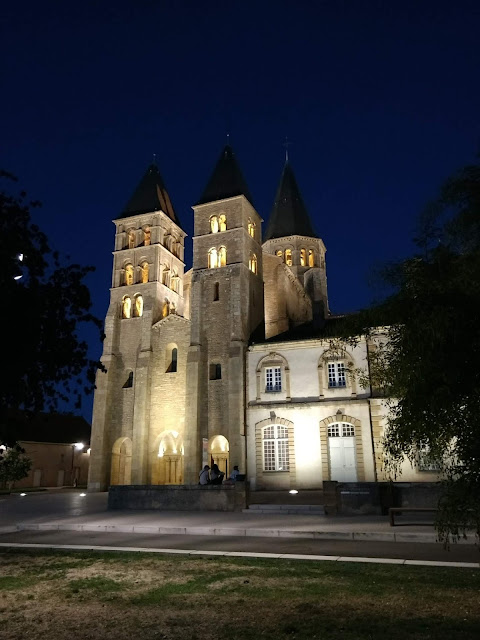 The Basilica is a fantastic building from all angles.  It does not look 800 years old.  I think a lot has been rebuilt as it says her from Wikipedia.  But still very impressive. 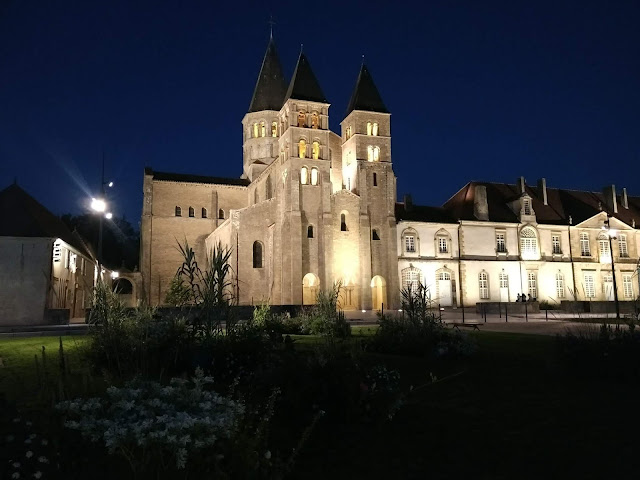 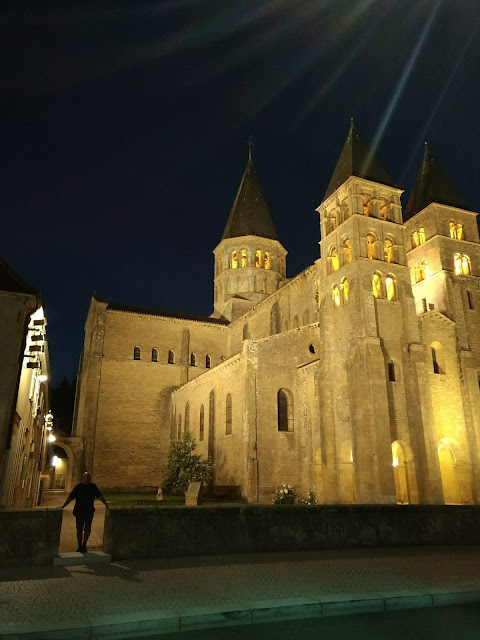 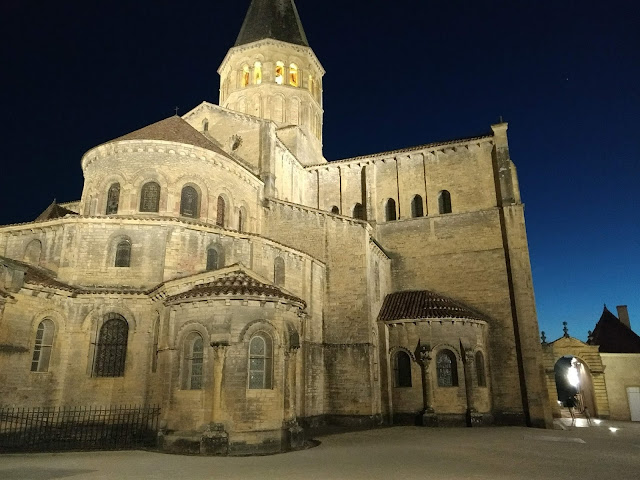 The town of Paray is another of those whose shopping area has contracted and the shops are staggered amongst the old streets between many vacant properties.  Some km East of Paray le Monial we enter an interesting section of the Canal du Centre where the former scale of industry, and working people in this area, especially ceramic tile making is evident by the number of huge derelict factories, almost as big as cathedrals themselves.

South Nivernais and a bit of the Loire

It's mid September and a few trees are beginning to turn to their Autumn colours.   The sun glows clear orange gold rather than the faded hazy yellows and scorched earth that we have been used to. 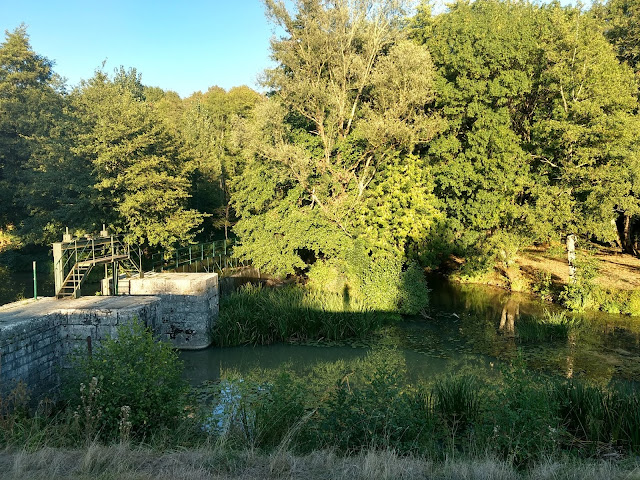 We have been travelling through the Nivernais where we saw many cyclists but not that many boats. 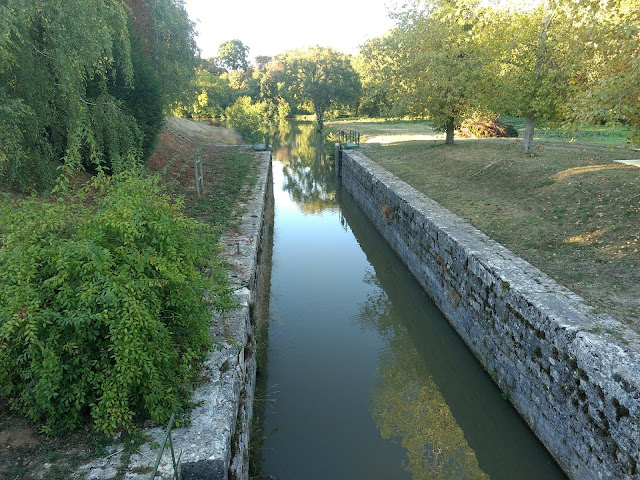 We then turned right and cruised a few miles up the Loire Canal before turning back and beginning our cruise along the Canal du Centre. The first time we did this route, we explored just about every side road, town and village that we came to.  This time, we spent more time alongside the canal, and just revisited some of our favourite spots.  The coutryside is beautiful in the remote area and there are plenty of small chateau, fortified manoires and ruined castles to see (if you are prepared to leave the canal!) The bridges on the Nivernais are a great topic of conversation amongst boaters, especially those whose air draft is borderline for going under some of these bridges. Quercy just squeezed through, and I noted that the bridges South of Chatillon en Bazios were the ones that cause the problem.  These are beautiful stone structures built I think in the 1830's.  To make things extra difficult, you have to go through them slightly off centre as the path runs along the inside of some of them.

After a while the arches on these same bridges have been removed and replaced with horizontal metal structures, keeping the stone sides.  So although low, there is no problem in navigating under them if you have managed to get through the ones further North. 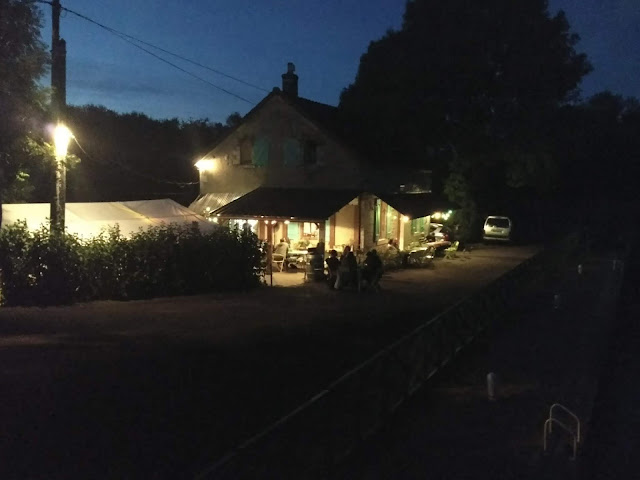 Very occasionally one comes across a lively cafe just near the canal and we found the best of places at Fleury sur Yonne, on the Nivernais.  Popular with local and boaters is served good food from a limited menu in a former lock keepers cottage, the tables and chairs spilling out onto the tow path and a quirky marquee outside.

Other notable rural or unexpected cafe spots are Chitry Les Mines on the Nivernais, also worth a mention is the lock keepers bar/cafe at Marigny sure Yonne.   Lovely mooring and cafe at Pont d'Ouch, pizzeria at Tanlay on the Bourgogne, and Samois-sur-Seine on the Haute Seine near Fontenbleau. 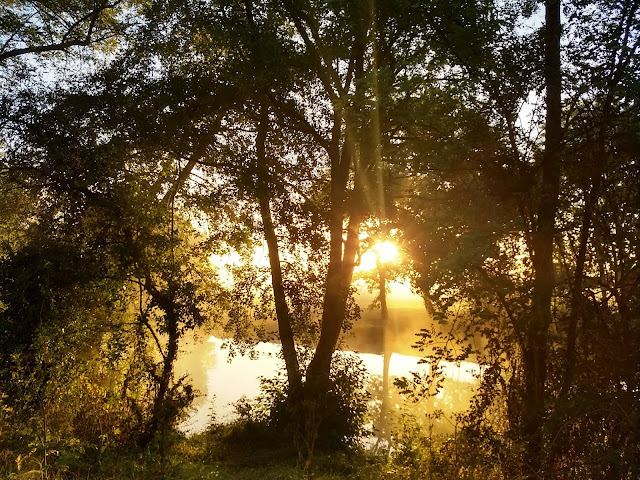 Posted by caya on September 11, 2018 No comments:
Email ThisBlogThis!Share to TwitterShare to FacebookShare to Pinterest

Back on the Nivernais. (We were here Sept/Oct 2015 see more photos of this lovely area on those previous posts)

Here we are on our last cruise in France, and I'm actually loving it! This is because I'm doing my two favourite activities (pottery and cycling) as well as boating.

Yes, I'm doing pottery on the boat, and Julian is coping well with being ignored whilst I'm concentrating, plus we are surrounded by basically wet mud.

So he is working the boat single handed as I'm far to busy to be bothering with ropes every time we get to a lock, but he loves the challenge of coping smoothly with manouvering in and out of the many many locks and lock staircases and when you get into a routine it usually goes like clockwork.


We have brought our car here this time, as we usually go by train, this is in preparation for clearing out the boat on our return.  So with our trusty fold up bike, I am frog hopping the car and cycling back to the boat every day which is about 20km, just about right as the fold up bike is not made for distance that's for sure.

The Nivernais is a great canal to cruise on or cycle along.  Such beautiful suroundings and interesting locks.  We went up the Sardy staircase of 16 locks yesterday, through a wooded valley.  Today bigger gaps between locks but sometimes up to 5 clustered or connected in some way. 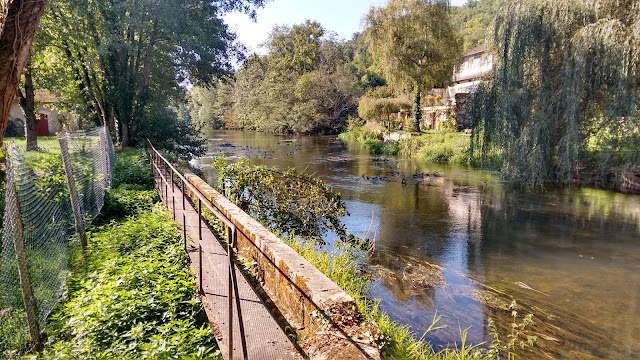 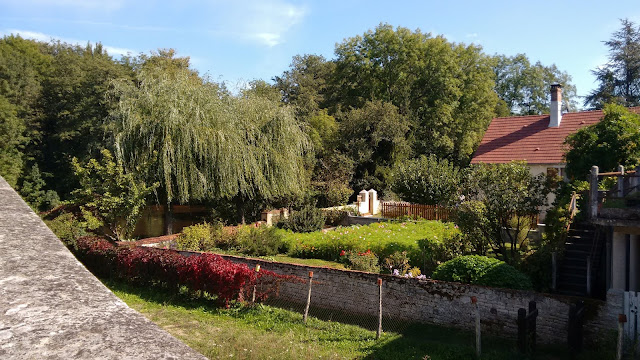 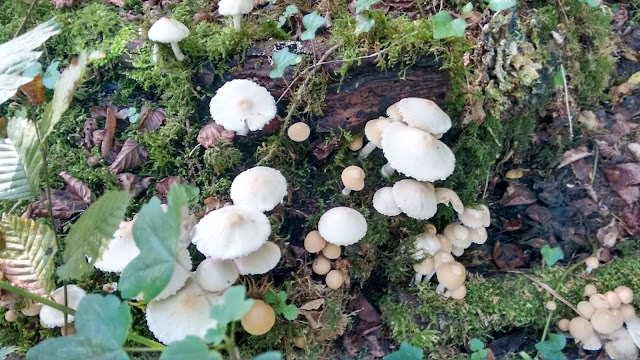 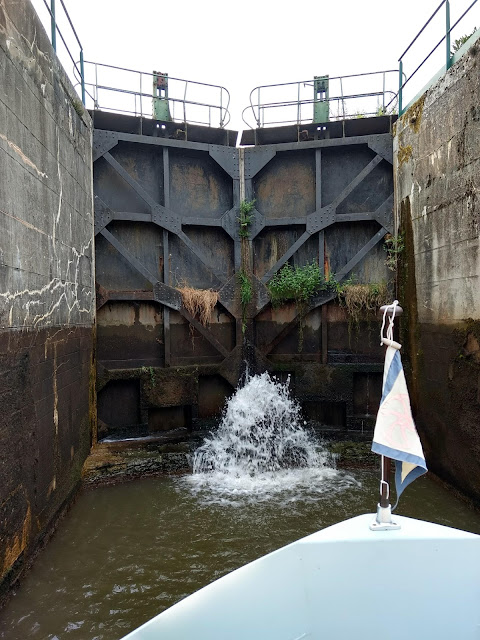 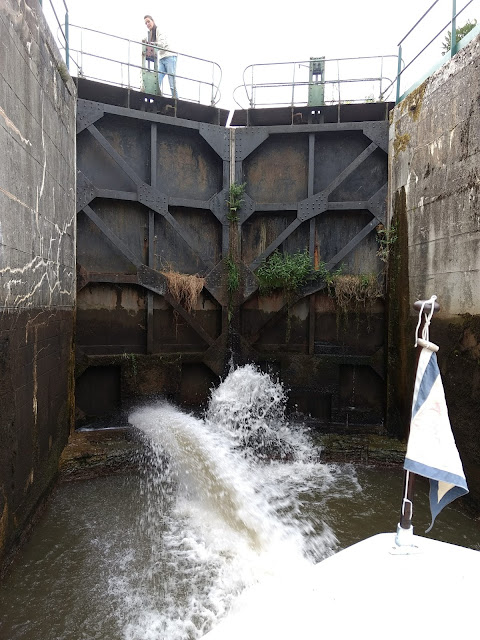 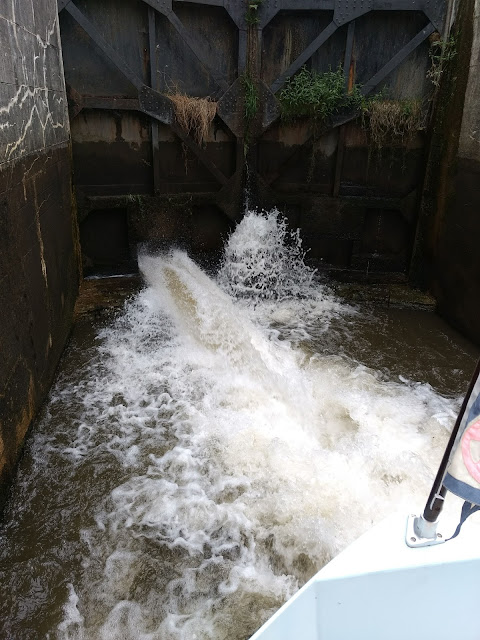 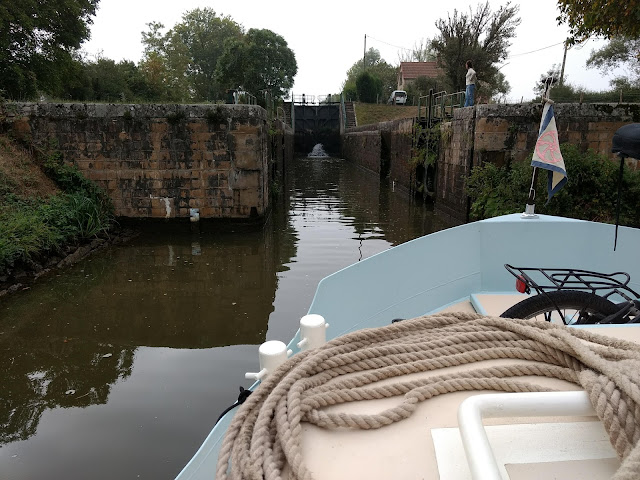 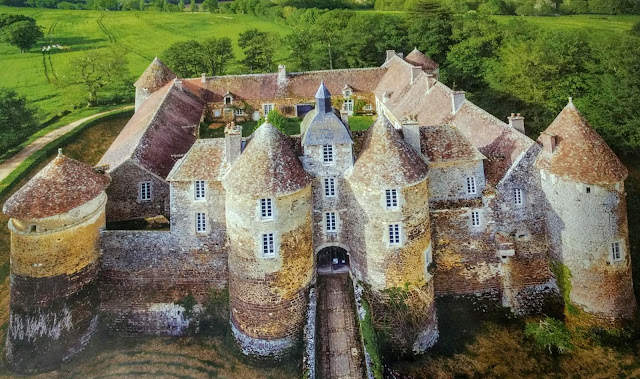 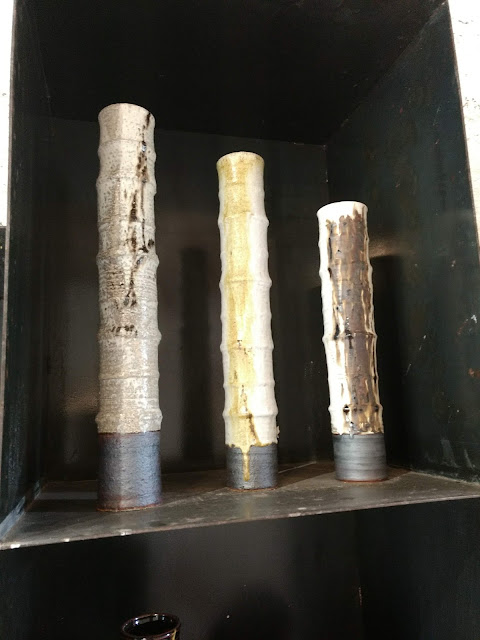 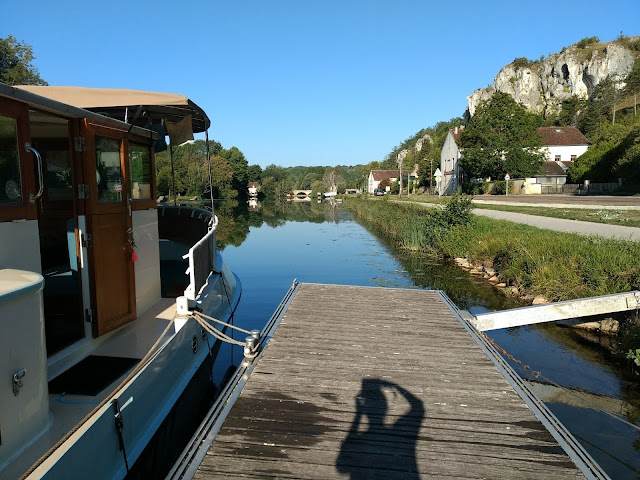 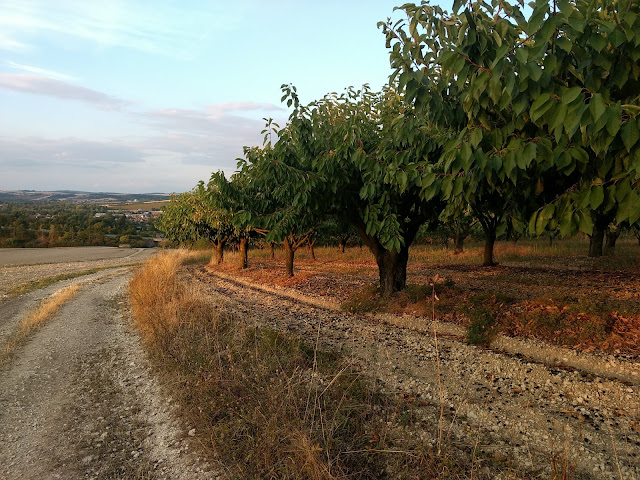 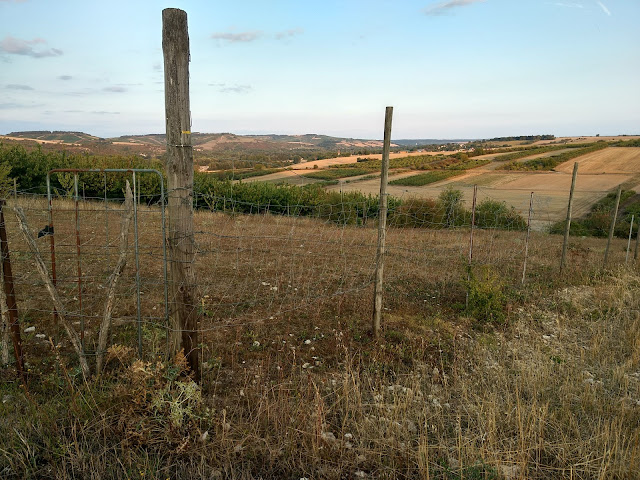 Posted by caya on September 07, 2018 No comments:
Email ThisBlogThis!Share to TwitterShare to FacebookShare to Pinterest
Older Posts Home
Subscribe to: Posts (Atom)